A Christian mechanic has been sentenced to death for blasphemy in Pakistan after he was found guilty of insulting the Prophet Mohammed by saying that Jesus Christ is the ‘true prophet’.

Ashfaq Masih, 34, was arrested in 2017 after he got into a verbal disagreement with a Muslim customer at his motorbike repair shop in Lahore after the man refused to pay his bill.

The customer had asked for a waiver on the grounds that he was a religious devotee – but Still refused the request, saying he believed in Jesus Christ and wasn’t interested in the man’s religious status as a Muslim.

Still was accused of ‘disrespecting’ the Prophet Muhammad and arrested after he allegedly said that for Christians, Jesus was the ‘true prophet’.

Five years after his arrest, Masih, who has a wife and daughter, was on Monday sentenced to death by a Lahore court. 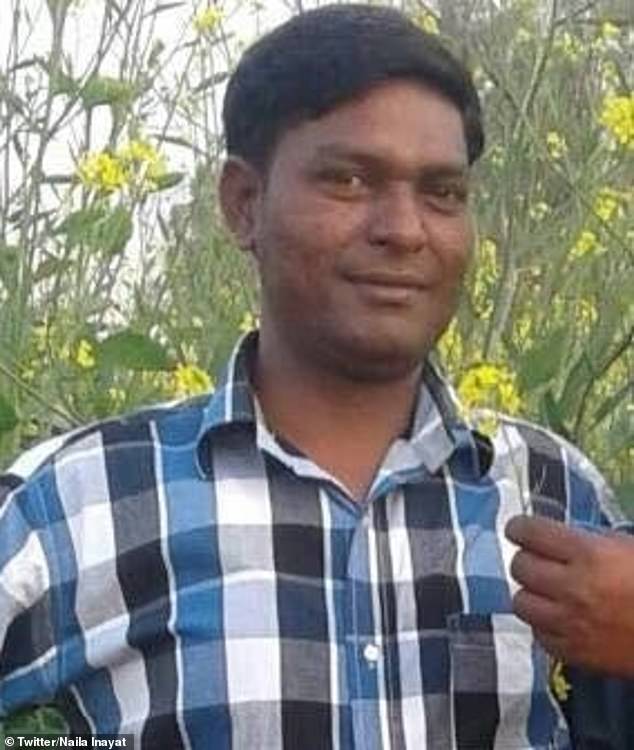 Ashfaq Masih, 34, was arrested in 2017 after he got into a verbal disagreement with a Muslim customer at his motorbike repair shop in Lahore after the man refused to pay his bill 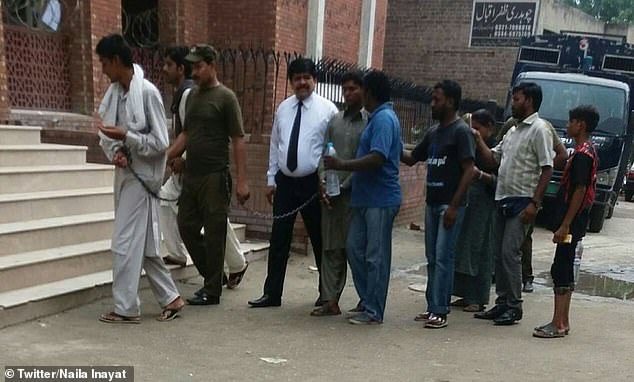 Five years after his arrest, Masih (pictured in 2017 before his first court appearance) was on Monday sentenced to death by a Lahore court

His older brother, Mehmood Masih, said that their family was reduced to tears following the judgment, saying that it feels like ‘the end of the world for them’.

Under Pakistan’s blasphemy laws, anyone found guilty of insulting the religion or religious figures can be sentenced to death. While authorities have yet to carry out a death sentence for blasphemy, just the accusation can cause riots.

In court, Masih claimed he was innocent of the charges and that the case against him was ‘baseless, false and frivolous’.

He also said the accusation against him was made by a rival who wanted to destroy his motorbike repair business.

‘I agree for my bill and said that I don’t follow anyone other than Jesus, and so wasn’t interested in the man’s religious status.’

Still has been in prison for five years pending his conviction due to a series of adjournments. His mother died in 2019 while he was behind bars and he was released on parole to visit her funeral. 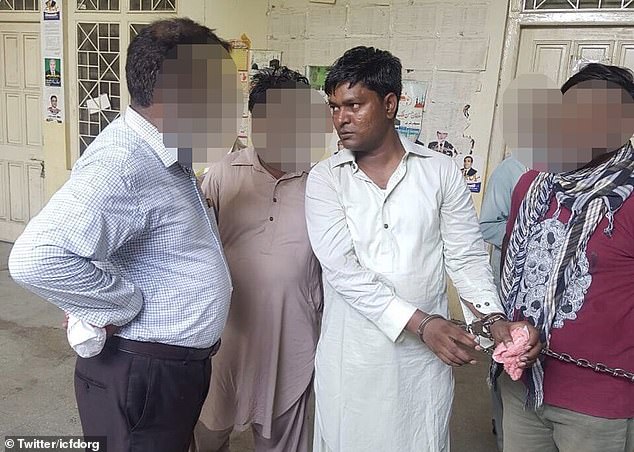 In court, Masih (centre) insisted he was innocent of the charges and that the case against him was ‘baseless, false and frivolous’

Nasir Saeed, the director of the Center for Legal Aid Assistance and Settlement, a charity which supports persecuted Christians in Pakistan, said in a statement the judgment was abhorrent.

He said: ‘I don’t remember any case where the lower court decided to grant bail or freed anyone accused of the blasphemy law. The judges are aware that such cases are made to punish and settle personal grudges with the opponents, especially against the Christians.

‘Because of pressure from the Islamic groups, lower courts’ judges are always hesitant to free the victims but make popular decisions to save their skin and shift their burden to the high court.’

‘He is innocent and has already spent five years in prison for a crime he never committed.’

A number of people have been sentenced to death in Pakistan for blasphemy.

In January, a Pakistani court sentenced a Muslim woman to death after finding her guilty of blasphemy for insulting Islam’s Prophet Muhammad in text messages she sent to a friend.

The woman, Aneeqa Atteeq, was arrested in May 2020 after the man alerted police that she sent him caricatures of the Prophet — considered sacrilegious — via WhatsApp.

According to a court order, the woman was also sentenced to 10 years in jail. 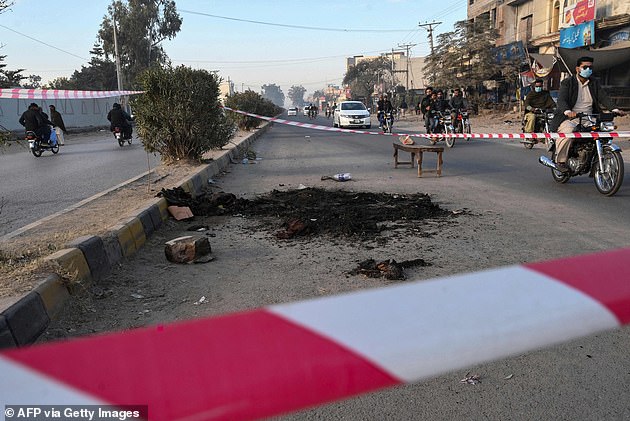 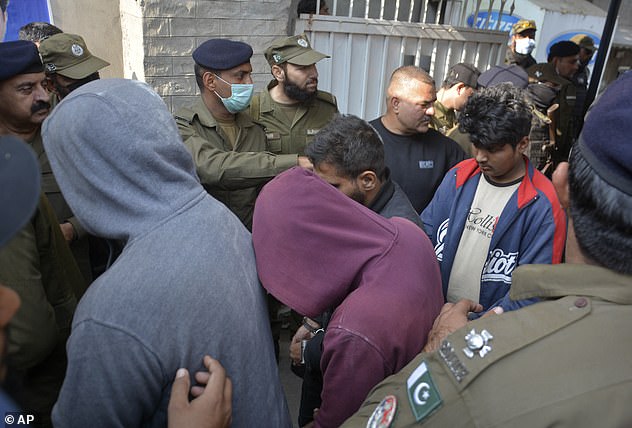 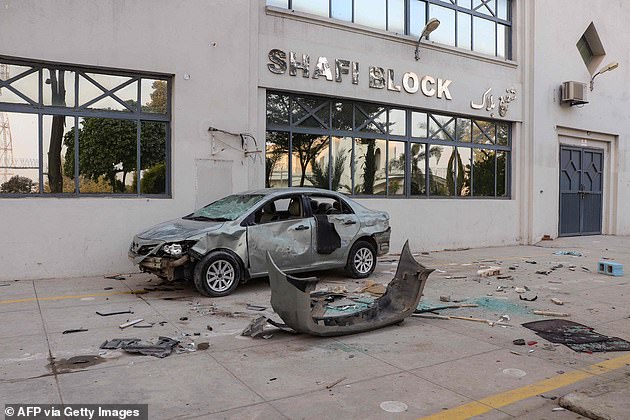 Prominent suspects were arrested after video footage of the violence showed clear instigators who incited workers as they killed the manager, dragged him outside, took selfies with his burning body and proudly admitted what they did

In December, a Muslim mob descended on a sports equipment factory in Pakistan’s Sialkot district, killing a Sri Lankan man and burning his body publicly over allegations of blasphemy.

The incident drew nationwide condemnation and authorities arrested dozens of people over involvement in the killing of Priyantha Kumara.

An anti-terrorism court in April was sentenced to six men to death, nine to life in prison, one to five years’ jail and another 72 to two years each in a mass trial over the crime. Eight of those sentenced were juveniles.

Saeed added: ‘The vigilante killing and misuse of the blasphemy law continues to grow in Pakistan, especially against religious minorities. Several innocent people have been killed and their worship places are attacked merely on allegations of blasphemy,’ he said.

‘The National Assembly has passed a resolution calling for the law not to be abused in ways like this, but failed to bring any changes or legislation to stop the ongoing misuse of the blasphemy law.

‘CLAAS continue to raise its concerns with the Pakistani government whenever possible, but so far our call for change has fallen on deaf ears.’